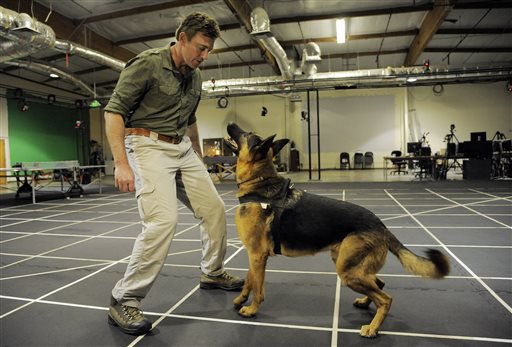 LOS ANGELES — His name is Riley.

Unlike his squad mates in the next installment of the rabidly popular “Call of Duty” series, he’s not adept at sniping enemy combatants or piloting drones. He can’t even pick up a gun.

“Call of Duty: Ghosts” isn’t due until November, but Riley has already become the breakout star of the military shoot-’em-up. He even has an unofficial Twitter account: @CollarDuty.

Yup, Riley is a dog, and he’s one of the largest and most popular technological leaps forward in the next generation of “Call of Duty.”

After footage released earlier this year revealed that “Ghosts” would feature a four-legged soldier, the Internet uniformly wagged its tail in anticipation. The mere tease of a canine character inspired fan art, doggy cosplay and the unofficial Twitter account, which has attracted over 28,000 followers.

“Ghosts” executive producer Mark Rubin said during a recent visit to developer Infinity Ward’s offices that the German Shepherd originated as an idea on a notecard during a brainstorming session. The developers didn’t actually know anything about military service dogs, just that unleashing one on the Activision Blizzard Inc. franchise was “a cool idea.”

“Call of Duty” fans drooled over Riley again last month when a new trailer released for “Ghosts” featured him lunging at a helicopter, taking a bite out of the human pilot and bringing the chopper whirling down to the ground. As Riley’s fame unexpectedly surged online, Rubin said the developers’ inclination was to let the game go to the dog.

“There was a risk of shoehorning the dog into scenes where he wasn’t originally going to be,” he said. “Fortunately, that only lasted for a few weeks and everybody got back to concentrating on making the game. It’s great that Riley is so popular, but let’s focus on the game. Let’s have Riley make sense and not just put him in space or in a scuba suit.”

While canine companions have been featured in many games – from “Fable II” to “Grand Theft Auto V” – the developers of “Ghosts” set out to create more than another best friend. They wanted a hero, a dog that would not only assist players but could be commanded at certain points throughout both the single- and multi-player modes.

In the game, Riley is outfitted with several gadgets based on technology employed by his real-world counterparts. For players, Riley’s battlefield perspective can be glimpsed through a camera mounted to the back of his tactical suit, and he can receive orders, such as creating distractions or taking down enemies, issued from afar by players.

To make Riley as believable as possible, the gamemakers first met with a retired Navy SEAL and his former military service dog to learn more about how soldiers and hounds work together. They later cast a pair of pooches, a German Shepherd named Ruger and a smaller Belgian Malinois called Rico, to be digitally captured for the game.

“We had several mo-cap shoots, and some of them we just had to write off as learning experiences,” said “Ghosts” lead animator Zach Volker, who noted that if players look close enough, they’ll be able to spot the differences between the two dogs portraying Riley. “Once we got a better idea of how to work with the dogs, we all became more efficient.”

Ruger and Rico were outfitted with custom motion-capture gear made from form-fitting suits intended for dogs with skin conditions. Neversoft mo-cap supervisor Kristina Adelmeyer said they originally wore special booties on their paws so dozens of cameras could film their range of motion. However, they didn’t act natural in their fancy footwear.

“We ended up using these pieces of tape that the mo-cap system could see as markers,” said Adelmeyer.

Rico provided the biting and tackling, while Ruger performed the movements. Chris Connell, Ruger’s trainer, said during a demonstration of his abilities at Neversoft earlier this month that the biggest challenge for the Schutzhund competition champion – that’s German for “protection dog” – was playing make-believe.

“In this environment, we didn’t have trees or grass,” said Connell. “It was like, `OK, Ruger. Pretend we’re in a desert area and act accordingly.’ Ruger is like, `Dude, this is a studio with mats like people do exercises on at the gym, and there’s white lines on the ground.’ Just trying to get him to act as if it was a real environment was the hardest thing.”

The inclusion of a dog in the violent, mature series begs the question: Will “Ghosts” have an “Old Yeller” moment?

“Everybody thinks we’re going to kill the dog,” said Rubin. “Maybe that’s the expected thing we would do, so maybe it’s not what we’ll do? We’ll see. People around here didn’t know, and they had that same sentiment: `We better not kill the dog.’ The emotional investment for the dog here has been just as strong as what’s happening out in the public.”